Judged by Jenn in Uncategorized September 16, 2012March 22, 2016 1,287 Words
I am not someone who ordinarily does things just because someone else says I should, or because someone guilts me into it.  I won’t lie; my mother still has the ability to coerce me using guilt tactics on occasion, but otherwise, I’m not overly susceptible to such nonsense.  Maybe that’s why I bristle at what I consider to be the adult version of the old “Step on a Crack, Break your Mother’s Back” bologna from elementary school that often rears its head on Facebook.  (Note: There are sooooo many things that irritate me about Facebook that it is a wonder I maintain an account.  The thing is, it also has a uniquely train wreck-like element that I have a difficult time turning away from.)
Come on.  You know what I’m talking about.  Those ridiculous status updates that drone on and on about how the poster loves his or her mom/child/dog/left-striped-knee-sock-with-the-hole-in-the-toe, and how if you love your mom/child/dog/left-striped-knee-sock-with-the hole-in-the-toe, too, you should repost this as your status as well, and if you don’t, well, must must not that knee sock so much after all.  Seriously?  The fact I don’t repost your nonsense status doesn’t mean I have anything less than the utmost love and respect for my left-striped-knee sock-with-the-hole-in-the-toe, or any of the other options listed above.  (Okay, not my child, but that’s because I — perhaps wisely — don’t have kids of my own.)  It just means I don’t have to behave like a sheep in order to demonstrate my feelings to a bunch of folks who honestly? Don’t care if I love my knee sock or not.  Same thing with the status updates that challenge the reader to repost this status as their own for one hour if they support whatever the cause de jour happens to be?  Really?  You think the only way to know if I support that cause or respect someone fighting a particular illness — or the only way for me to show that — is by my facebook status?  Wrong.
Lately I’ve been seeing a new one.  It usually includes what is intended to be (and often is) a thought-provoking photograph, and states that “1 like = 1 respect”, or something similar.  I swear, sometimes I don’t click “like” just because the whole idea of these posts offends me.  Yeah, I know; I’m showing them, right?  But these statuses annoy the living daylights out of me.  And it is not like I can escape these posts by “defriending” or “unliking” something I follow on facebook, because none of these things are entities that I follow.  Instead, they pop up in my news feed because someone I am friends with “Likes” or comments on a given post.  I’m not going to defriend someone just because they “Like” something I find annoying.  Consequently, here we are.
I mentioned this to a friend the other day and she indicated she had not seen what I’m talking about.  In case you haven’t either, here are a few recent examples I took screenshots of. 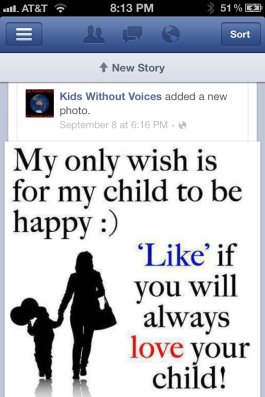 This one irks me.  So I should “Like” this status if I will always love my child.  Does that mean if I don’t click “Like”, I won’t?  So lest others think you don’t love your kid (unfortunate-looking, ill-behaved, and bratty though he/she may be), you must click “Like”.  Or, here’s an idea: perhaps you could, I don’t know, get the heck off of Facebook and show your kid you love him/her by spending some quality time with the little troll.  Or if you child is older, pick up the phone and let him/her know he/she is on your mind.  I’m pretty sure that’s more effective than “Liking” a random Facebook status.
The next couple of screen shots happen to be military-related.  Before I post them, let me just say that I have the utmost respect and gratitude to those who have served, and those who are serving, in our military.  These are just examples of what I call “shame/guilt posts” that make me want to bang my head against a brick wall, not an indication that I don’t respect the subject of the post. 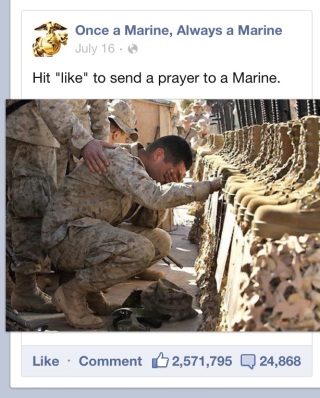 Or, we could find ourselves a quiet moment and actually say a prayer for the safety of those who are serving.  (And I don’t mean post that prayer on Facebook so everyone knows you’ve done it; I mean log the heck off of the internet and say one the old fashioned way.) I’m guessing that would be more productive than telling someone on the other end of a Facebook account that you “like” their status.
Next we have: 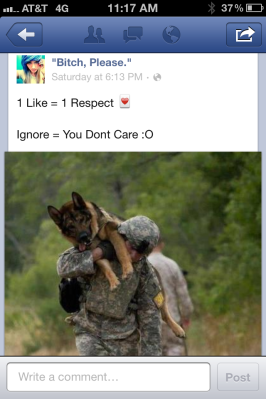 Really?  The poster — whose screen name is “Bitch, Please” —  thinks if I “like” this photo, I am showing respect, and if I don’t “like” it, I “don’t care”.  To this, I say, “Bitch, please.”  That is ridiculous.  It’s a picture of a soldier carrying a German Shepherd.  If you care about our Troops, maybe send a letter, or a care package, or do something else to actively support them.  If you care about the dog, maybe make a donation of food or your time at the animal shelter, or make a donation to the Humane Society.  Again, these are things that will be far more lasting means of support than simply clicking “like” because someone named “Bitch, Please” posted a photo/status that shamed you into it.
Before I get to the next two, I should tell you that they are religious in nature.  As with the military-related examples, let me say that I am not in any way disrespecting God or religion.  These are simply examples of posts that make me cringe.  For example: 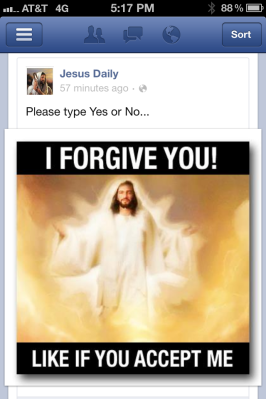 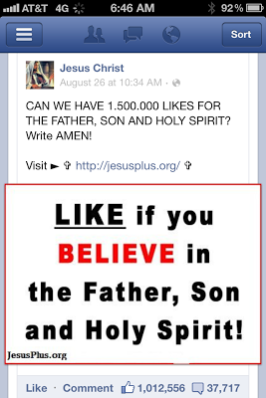 Okay, I have several issues with the first one.  First of all, I have serious doubts that Jesus Christ has a Facebook page, so for someone, even a religious entity, to so name a Facebook account is something I find offensive.  And really?  The “Jesus Daily”?  Then, to solicit “likes” for the “Father, Son and Holy Spirit”, and to suggest one should “Like” this status if one is a believer, or if one accepts Jesus, is just inane.  Here is my thought on this: If you are a “Good Christian Person”, you shouldn’t have to “prove” it by clicking “Like” on a facebook status; it should be evident in your actions.  I once worked with a woman who went around constantly telling us what a “good Christian” she was.  In reality, she was a stark raving shrew who was a backstabbing, judgmental gossip.  She could click “Like” or tell me how good and pious she was all day, but I knew her, and her actions suggested otherwise.
Here’s the thing: Just as I don’t believe bad things are going to befall me if break the chain by failing to forward a chain letter or chain email, I don’t believe failing to click “like” makes me a bad person, someone who disrespects the military, someone who doesn’t believe in God, or someone who doesn’t support a worthy cause or individual.  I do, however, believe that if I want to show support for an organization or a cause, there are ways to do so that will actually bring a benefit to that cause or organization that just aren’t achieved by clicking “Like” on some entity’s Facebook page.  Also, “Liking” a Facebook page is not going to convince me that you’re a good person any more than telling me what a good Christian you are is going to convince me you are, in fact, a good Christian.  Liking the page just convinces me that you give in to guilt/shame statuses.  Actual actions speak louder than facebook clicks.
Advertisement