Yes, it is my second post of the day. Why? Because one post on Halloween just wasn’t enough — especially when this lady opted to wear THIS hat to her hearing today.

I’m suspect the Bailiff “suggested” that she remove it since she was no longer wearing it when I looked around a few minutes after this photo was taken. (A great reminder to snap those pictures when the moments present themselves!) I am pretty sure she was NOT in “costume” for today’s holiday. I am equally sure that this was a bad fashion call for the courthouse. 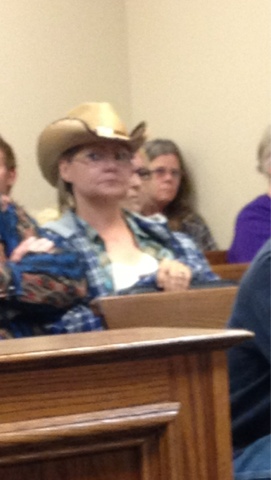 Advertisement
The scary thing in this photo is not the hideous, next to no one looks good in that color, mustard yellow henley this lady is wearing, although that is certainly frightening enough. The really scary thing is the large black thing in the pendant she is wearing. That? Is a spider. Nothing says Happy Halloween like a large arachnid around the neck (although to be fair, I snapped the photo a couple of weeks ago.) I hope this is not a look that catches on. 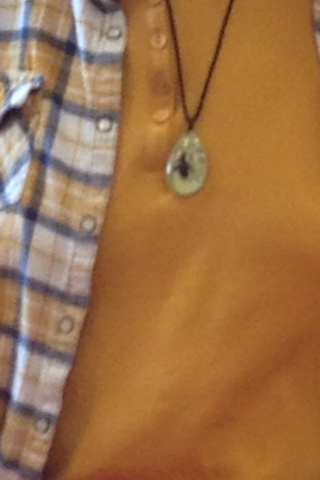 I just love when defendants appear in court and think they are going to pull one over on me and I turn it around on them.  Yesterday in court, a Defendant with whom I’d spoken at a previous court appearance — and whom I found to be exceedingly unpleasant, mostly because of his really bad attitude — approached me.  Usually that is not the way it works; usually the bailiff gives me the files of the defendants who are present, and I call them out into the hallway to discusses their respective cases, one at a time.  This guy attempted to skip the line by coming up to me directly as the chaos of the afternoon docket was just beginning.
The courtroom door had just been unlocked, and there were way too many people standing in line and jockeying for position to check in with the bailiff.  At the front of the courtroom, defense attorneys rushed the various plaintiffs’ attorneys, in a hurry to get back to their offices to rack up more billable hours.  (Sorry, does that sound jaded?)  I was at the counsel table juggling defense attorneys and putting my orders with the appropriate files when the Defendant, whom I shall call “Weasel” due to his unsavory demeanor, walked up and said, “Hey! My attorney can’t be here today, so I am supposed to ask for a continuance.”  (No, there is nothing inherently wrong with what he said; just remember, it isn’t what you say, it’s how you say it!)   What weasel apparently failed to realize was I prepared my docket for court, so I was aware that he was, at least at that moment, still unrepresented.  The exchange that followed went like this:
“And who is your attorney?”
“[Name of Attorney]”
That was where I became more amused than annoyed, because the attorney in question was standing maybe an arm’s length away from me with his back to Weasel.
“Oh, really?  That’s him standing right there.”
Needless to say, Weasel became very flustered, as the attorney turned around, asked Weasel his name, and indicated he had not ever met with Weasel.  Now, I think they did go out into the hallway where they had a little chat that probably resulted in the attorney accepting representation of Weasel, but still.  I got to have my fun.  Yes, I know it’s a shame that that is all it takes to amuse me, but at that moment, ruffling Weasel’s feathers was all it took, because, really?  I am not usually that difficult to get along with in court.  If a Defendant tells me they need more time to hire an attorney, I am probably going to agree to it unless the case has been dragging on for an unreasonable period of time.  Lying to me is really not necessary.
Oh, well.  I’ll leave you with a few pictures from yesterday’s court experience…

Nothing says, “attitude” like a mohawk and facial tattoos.  The coat he was carrying was oddly fuzzy/furry.  I’m not sure what that was all about, but it really didn’t go with the rest of his look.

I’ve had dark hair and red highlights before.  Currently I have ombre’ hair that is dark in the roots and slightly auburn at the ends.  With that said, I walked into the courtroom and was pretty shocked by this ‘do.  Trust me when I say this photo doesn’t do this red and black combo justice.  I know it is Halloween week, but something tells me this hair was not the result of a costume-gone-bad. 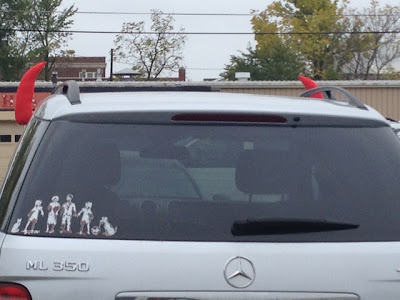 It seems everywhere I look I see yet another vehicle with a stick figure family in the back glass.  Surely I am not the only one who finds this trend both disturbing and annoying?  Is it really necessary to announce to the world that you are married with 2.3 children, a dog, a cat, and a turtle via a vinyl sticker on the back of your minivan or SUV?  (And for that matter, is it really safe?)
On the safety front, I am also troubled by the activity decals that so many parents put in the back glass identifying not only each and every activity in which their little darling participates, but also the school/team for which the kiddo engages in said activity, and the child’s name.  Really?  Do these people not watch the news, read the paper or spend any time on the Internet?  Really??  I do have at least one friend who shares my anti-decal view.  She has a daughter who is cheerleader at her junior high school.  At dinner recently, she said hers is the only family that didn’t do the window decal or the yard sign.  She said she is paranoid enough without advertising that a cheerleader lives there or rides around in her vehicle.  I completely support her position on that, and as soon as she said they didn’t do the window decals, I was cheering for that decision.  It’s sort of like the decision to NOT put a child’s name on his/her shirt.  Any old perv could approach the kiddo and call him/her by name, which, I’m sorry, has to give Mr. Pervy a little more credibility when trying to abscond with someone’s offspring.
Here is an example of what I’m talking about.  I snapped this outside one of the courthouses I visit regularly.  It caught my eye because of the crossed batons.  While I am thrilled that this competitive baton twirling team exists, Anna’s mom might as well have printed the entire performance schedule on the back glass, because in this day and age, that sort of information would not be too difficult to obtain. (Note: No, I didn’t try.)

Anyway, back to the stick figures.  As you  have no doubt gathered, I am not a fan.  I think they are goofy.  They make me roll my eyes, and given the volume of the stick figure families on vehicles and the amount of time I spend on the road these days, well, all that eye-rolling gives me a headache.  I’ll be glad when that trend is over.  In the meantime, though, I have taken to paying attention to out of the ordinary stick figures.  Here are a few of the, um, different ones I’ve noticed.  I know some of these examples are real because I photographed them myself; it’s quite likely that others are not, but they are still worthy of being shared.

Swell.  Now we know your vehicle may contain mom, dad, and two sons, all of whom are Dallas Cowboys fans.  Spectacular.  Hard to get that from traditional stick figures, though, so they’ve plumped up the drawings a little bit and added color and “fan gear”.  (Note: I’m not a Cowboys fan; this just caught my eye in the grocery store parking lot last week.)

I don’t recall where I acquired this one.  It’s a little more descriptive than most, and again, plumps up the traditional stick figures, at least to a certain degree.  I’ve heard there is a debate on as to whether parents should tell their children they have a favorite.  I think putting this on the back on one’s minivan sort of eliminates the need to come out and say it.  It also eliminates an question as to mom’s opinion of dad.

I am the first to admit, I totally do not get the entire zombie thing that has become so popular.  Vampires? I understood.  Harry Potter?  Yep, I’m with ya.  Zombies?  Yeah, not so much.  (Side note: I also do not understand the thing with the mustaches.  What is that all about?  I’m not sure which makes less sense, but I’m pretty sure I follow the zombies further than I follow the mustaches.)  If memory serves, I pulled the photo on the left of the Internet.  (Someone’s facebook, maybe?)  The one of the right, I snapped — not very well, apparently — in the parking lot of a local bagel restaurant.   Again, these “stick figures” are less stick, more figure, and in the case of the one on the right, a little bit of blood and guts.  The one on the right cracks me up with the declaration that your stick figure has been devoured.  Even given my complete and utter lack of zombie-understanding — I work with someone who bought (and wore) a rubber bracelet in support of “Zombie Awareness Month” a few months ago.  Did I mention I DON’T GET IT?!?! — these decals are suitably sarcastic and, in my opinion, an appropriate response to those blasted stick figures.

I saw this online yesterday.  Nothing like putting oneself out there, right?  And mom appears to be doing just that.  With this SUV, one gets a mom, a daughter, a son, and either a cat or a dog.  (The photo isn’t quite clear enough for me to the able to tell which four-legged family pet.)  Great.  And I get the distinct impression that mom is needy, clinging, and doesn’t think she can function without a man.  (Yeah, I’m getting all of that from the window decal and shoe-polish addendum.  This blog is called JUDGED by Jenn, is it not?  So yeah, maybe I’m “judging” a little bit.  Go figure.)  This is a great lesson for the kids, and in my paranoid, former deputy prosecutor mind, as good as an engraved invitation to predators.

Part of a parent’s job is to scar his or her kids for life, right?  Oh, is isn’t?  Well, apparently this mom didn’t get the memo.  Look, I did divorce work for too long not to find this completely hilarious.  It is, however, inappropriate.  We have mom and her passel of small children on the left, and “Beer guzzling baby daddy and his ho” on the right.  It’s just a gut feeling, but I don’t think this is an attempt to demonstrate family unity.  I’m also pretty sure it would go against the “no disparagement” provision that is present in the standard visitation order of at least a couple of the courts I have practiced in.  And besides all that, aren’t all those super-sized stick figures blocking the view out the back window?
And finally, I give you my personal favorite:

I think this says it all.