Special thanks to Tracey for the title idea.

6:04 PM — ON THE WAY. I am on the way to meet my friend Hannah at the NWA Boutique Show. I was supposed to meet her 4 minutes ago, but twenty minutes in the bank’s drive-thru will make even the most punctual among us — which I am not — tardy.
I did see this fine example of quality parenting while waiting in line. I am pretty sure that kiddo is of an age and poundage that he should be in some sort of restraint rather than hanging out the window…

6:34 PM — STRIPES ARE STRIPES: We have arrived and battled our way past a sea of chevron to get inside. One of the first things I saw on the way in, though, was this great example of chevron-gone-wrong. As Tracey pointed out, stripes are stripes, regardless of the zig and the zag. And on some shapes? Well, stripes just shouldn’t happen…  It’s a great try at a cute outfit.  I’ll give her that.  But I’m pretty sure if she realized how very posterior-emphasizing this skirt is, she would have opted to wear her chevron elsewhere on her body.

6:35 PM — NO PHOTOGRAPHS.  I’m going to have to be even more careful with my covert photography than usual since there is a sign that prohibits taking photos of the booths.  Of course, I am not really taking photos of the booths or their wares.  I am photographing the other attendees…  (Wonder if that explanation will fly if I get caught…?)
6:37 PM — OOF.  Speaking of things that are not flattering… As Tracey said when I sent this picture to her, that’s a lot of denim. Bless her heart. 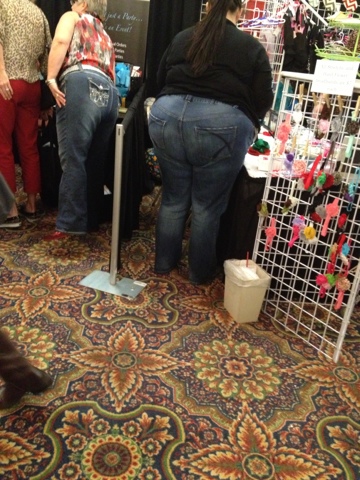 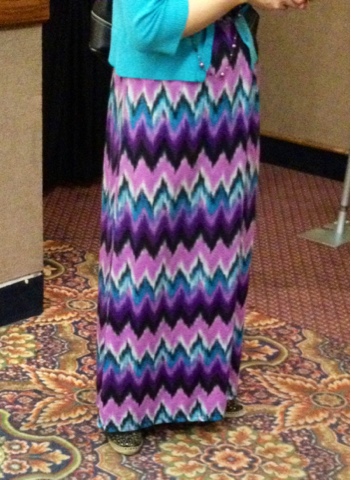 6:52 PM. RE-PURPOSED PHONE CORDS.  Reusable hair wraps. Um, that’s a phone cord.  With beads.  I guess now that next to no one has a corded phone these days, the phone cord manufacturers need to do something with all that slinky-shaped stuff.  I am not sure I have a good suggestion as to what they should do with it it, but why on earth would I want it tangled up in my hair?

(In the interest of not taking photos of the booths, I swiped this photo off of the Internet after the fact. And yes, for anyone who cares about the tabs at the top of the screen capture, I was attempting to learn how to field strip a particular firearm at the time.) 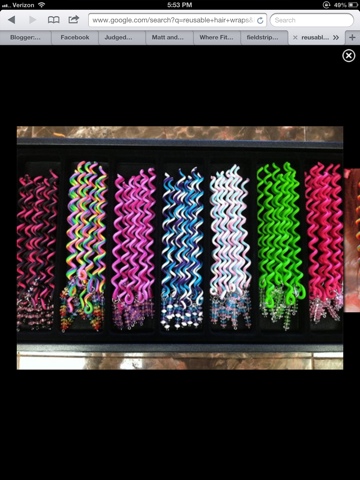 6:56 PM — TULLE. Okay, that’s it! I want a freaking tutu!
(In the interest of not taking photos of the booths, I swiped this photo off of the Internet after the fact.) 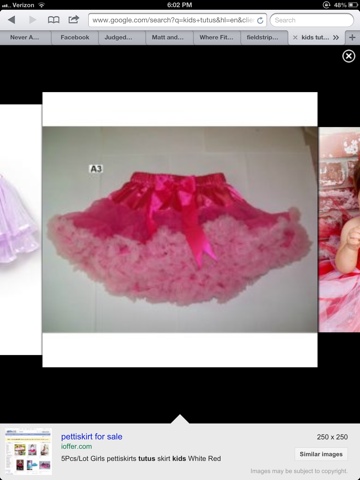 7:03 PM – SEQUINS.  Wow! That’s a lot of sequins. And are those rubber rain boots?  With mustard yellow leggings.  I mean, it isn’t raining, but they kind of have that look.  And they are a bit incongruent style-wise with the sequined skirt.  I just don’t “get” this outfit. 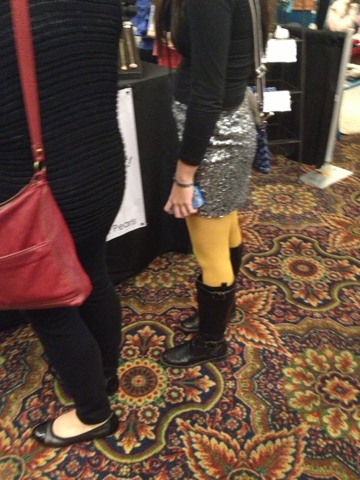 7:14 PM — BLANKET DRESSES. You know that super-soft, ultra-cuddly fabric they use to make blankets and stuffed animals for babies? I won’t lie; I fondle that fabric when I encounter it (which isn’t often, as I don’t spend much time around children. Shudder!); it’s soothing to the touch. With that said, I would not wear that fabric as a dress. And the lady peddling them? I’m going to say she shouldn’t wear a dress made out of it, either. 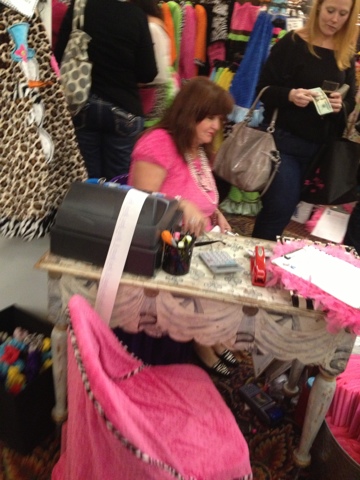 7:18 PM — PROMOTING YOUR PRODUCT. The sign above the booth says, “It works! Body Wraps”. Um, what do they do? And does the lady hocking their wares use them herself? Because if so? I am very frightened about what this product would do to my body (and my hair, for that matter).  Let’s keep walking.  Quickly. 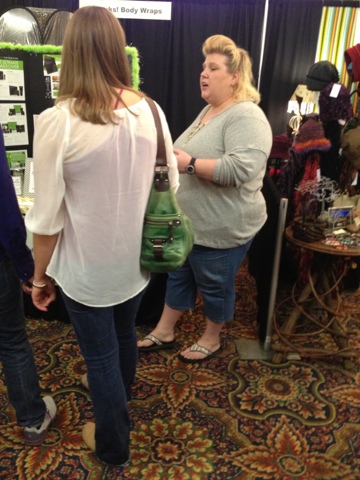 This individual is NOT looking at the body wrap booth, but her facial expression is appropriate. 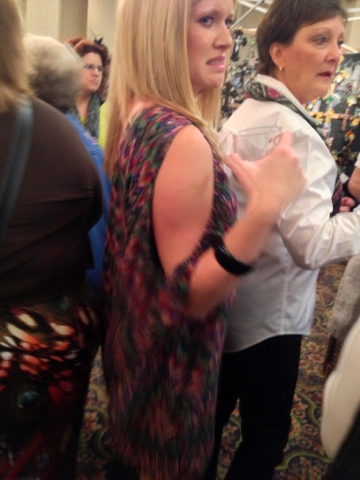 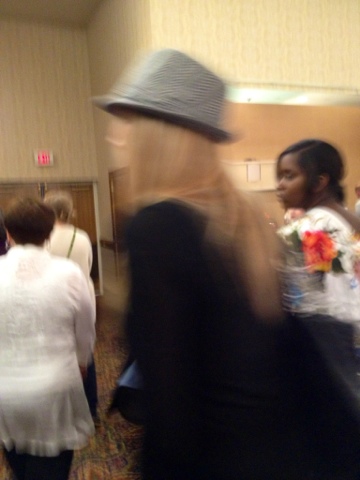 7:37 PM — GOOD OBSERVATION.  Standing in front the Swanky Sooie booth, Hannah comments, “it just seems wrong to have BBQ and Razorbacks on the same shirt.”
(In the interest of not taking photos of the booths, I swiped this photo off of the Internet after the fact.) 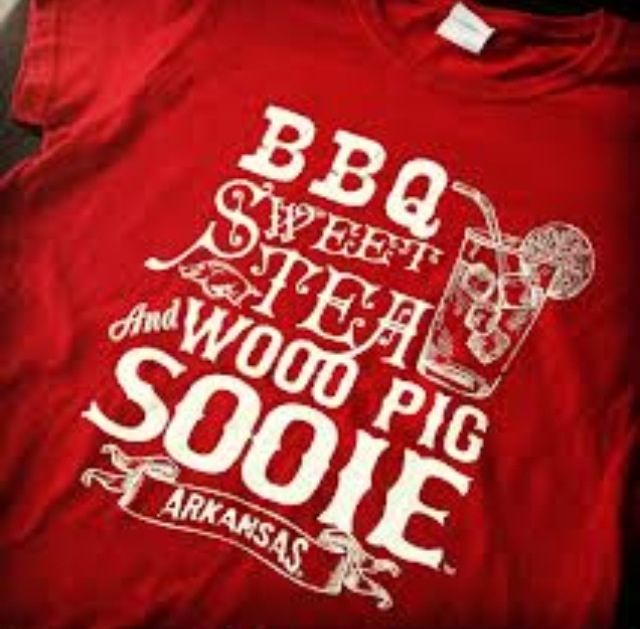 7:44 PM — DOUBLE TROUBLE.  Making one last lap around to pick up a couple of things.  I just keep seeing things that distract me.  Like this:

It is November.  She is wearing some seriously tight capri pants, flip-flops, and a shoulder-baring example of chevron-gone-wrong.  And as if this isn’t bad enough… Her Bobbsie-Twin is following along right behind her… I. Am. Not. Kidding.

Once was not good.  Twice?  Well, it certainly is NOT nice.  Yikes!
7:49 PM — RELAX.  We have stopped to look at a pair of boot socks we saw earlier.  They were white, but appear to have been tea-stained, and they have ribbons and a button sewn on them.  I think they are adorable.  Hannah thinks they look used.  She says she played in the mud as a child and recognizes dirty socks when she sees them.  I, however, am taken with them and am making the purchase.  As I turn away from the merchant with my socks safely bagged, Hannah looks at me and says, “RELAX!!!! Don’t do it!!!!”  For a moment, I think she is talking about my sock purchase.  Then I realize the DJ has changed songs, and Frankie Goes to Hollywood is blasting from the speakers.  Ironic timing.

7:54 PM  — I MUST HAVE IT. I saw this painting early in the evening and managed to talk myself out of it.  I continued to lust after it, though, and after successfully talking myself out of it more than once, I finally gave in.  It now hangs in its new home on my living room wall.

Here’s why:  Two years ago, I ran across a purple coffee table at a flea market.  I liked it, wanted it, and decided I couldn’t use it.  After telling my mother about it, we decided I could use it with my red couch and love seat, along with zebra print.  Sold on the idea, I returned to the flea market in the hope that my purple coffee table was there waiting for me.  It wasn’t.  And for the last two years, I have regretted not purchasing the darn thing when I saw it.  I bought the painting because I feared if I didn’t, it would be my “new” purple coffee table, and two years from now, I’d still be wishing I had gotten it.
8:00 PM — CALLING IT A NIGHT.  We are leaving the convention center and going in search of food.
Overall impressions:  I am glad we went.  The people-watching was spectacular, and I found gifts for a couple of people, as well as a couple of “gifts” for myself.  With that said, it was really pretty disappointing.  I suspect those with small children might have enjoyed it a little more than I did, but really?  How many hair bows does one child’s head need?  (If you were a vendor at the boutique show, the answer was obviously “an infinite number”.)  I do think it was worth going.  Once.  I’m not sure that I will repeat the experience, though.
Advertisement