Judged by Jenn in Uncategorized November 6, 2012March 22, 2016 1,132 Words
Some days I go to court and I don’t encounter anything that makes me grab my phone and angle for a covert photograph or enter notes on something I simply must remember to write about later.  Other days, it is a veritable smorgasbord of blog fodder with blog-worthy items all but throwing themselves at my feet.  Yesterday?  Well, yesterday was the latter.
My day began with a single case in an upstairs division, followed by a hefty docket in my regular division.  Because of that, my first stop, after getting through courthouse security and chatting with one of the deputies (with Arkansas ties) about the Hogs’ (surprising) success over the weekend, was the elevator.  I may have mentioned it before, but the elevator in that particular courthouse is one of the slowest ones I’ve ever had the displeasure of riding.  I am serious when I say it would be absolutely zero fun for a small child who enjoys riding the elevator up and down.  It moves at a positively geriatric pace.  This fact was particularly unfortunate yesterday since the two individuals with whom I shared the elevator car apparently didn’t put a whole lot of emphasis on personal hygiene that morning.  By that I mean soap and deodorant were clearly not in use.  And clearly hadn’t been for some time.  What was it the assistant band director at my high school told an especially odious smelling band member one day?  Oh, yes, it was, “Soap and water are cheap; use some”.  The gentleman (who, for anyone who cares, arrived for court in baggie basketball shorts, a t-shirt and untied high-top athletic shoes) and his female companion (whose attire I could tell you absolutely nothing about other than she was wearing flip-flops) could have stood to follow that advice.
Coming downstairs, my morning docket went pretty well.  It was not until I was at the front of the room visiting with the court clerk about a file I needed for the afternoon that I saw it.  It was eye-catching, and I knew immediately that photographs were necessary.  It was what I have retroactively named the “Bad Hair Bench”.  There were maybe 8 to 10 people in the courtroom when I saw it, and three of those people were on the back row.  Two of them had some seriously questionable hair.  I can’t even say they were having a bad hair day.  They were having bad hair lives, bless their hearts, and someone with more style sense than a colorblind turtle needs to take these gals to a salon where a stylist whose sensibilities are offended by these cuts can straighten out this mess.  There are other simple, easy-to-fix styles that would be far more flattering.  I offer exhibits A and B as evidence of the atrocities I witnessed. 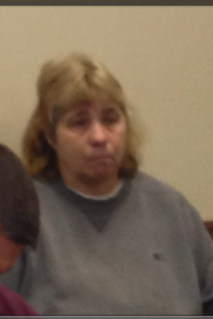 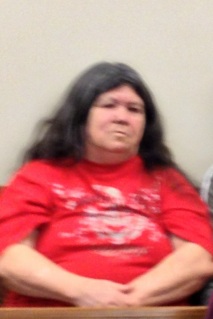 The level of enthusiasm on the faces of these ladies is priceless, isn’t it?  They were not present for any of my cases, and for that I am thankful, mostly because I had begun mentally referring to them as “Mullet” and “Mop”.  I fear that, had I been required to interact with them in some way, I might have accidentally referred to them by the names I had so appropriately, yet not so kindly, given them, and that would have been, um, awkward.  For them, I mean.
After snapping photos of those occupying the Bad Hair Bench, I departed the scene and went to grab a bite to eat before the afternoon docket.  I returned to the courthouse a little early and got a primo parking spot, directly in front of the building with an outstanding view of the doors.  I consider that a spectacular vantage point from which to engage the sport of people-watching, and yesterday did not disappoint.  First, I saw a gentleman walking down the sidewalk in front of the building wearing a sombrero.  Yes, a sombrero.  It was raining when I snapped the photo, so I apologize for the poor, rain-drop riddled, quality of the picture. 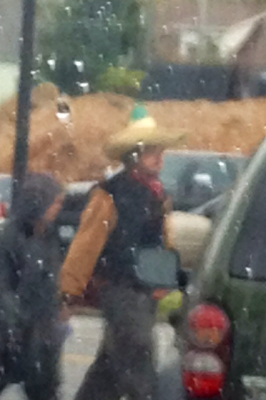 His companion went with a more traditional approach of a hooded rain jacket, while he went with a sombrero.  And what appears to be a bandanna.  Truly, I have no words.  (I do wonder if his companion attempted to talk him into or out of wearing the sombrero, though…)
And if I found myself lacking for words with respect to Mr. Sombrero, well, you can just imagine what happened when I saw this… 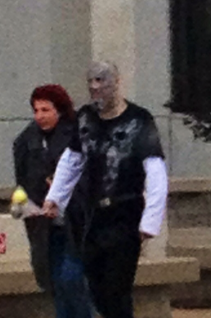 If you are thinking that his face and head are one gigantic tattoo, you would be correct.  I saw this gentleman from afar and to be perfectly honest, I was a little frightened.  Don’t lie; you’d be scared, too.  He may be the nicest guy in the world, but the reality is, he looks a little (read: a lot) like something out of a horror movie.  It was a cloudy, overcast, and, at times, drizzly day, and then, this emerged from the fog.  I regret that I wasn’t able to get a better photo, but WOW.  I am not anti-tattoo, provided the tattoo means something to the tattoo-ee.  For the life of me, however, I just can’t imagine what would inspire one to tattoo one’s entire face and head, or what that could possibly mean to the tattoo-ee.  But who am I to judge.  Oh, wait…
And last but not least, upon entering the courthouse for the afternoon docket, I watched an elegantly dressed lady come through security and head down the hallway — in her fur coat.  Look, I know it isn’t politically correct to wear fur.  Yeah, yeah, yeah.  Blah, blah, blah.  I invited everyone to calmly step down from their animal activist high-horses, as the point of this post has nothing to do with animal cruelty.  Let’s evaluate: temperatures were in the low 50’s, it was raining, and she was wearing a fur coat.  And not just any fur coat.  It was a full-length fur coat, suitable for a high-society evening out.  (See below.) 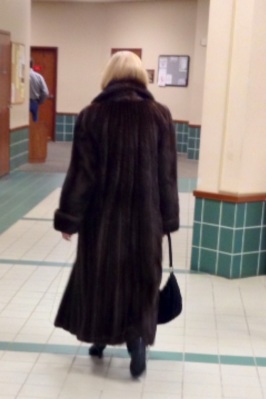 I don’t know if she bought it at an end-of-the-season fur sale last year and had waited all summer, and just could. not. wait. another day to break out her new coat or what.  Although it was pretty — yes, I said that — it just really didn’t seem like the day for it.  I remember when rabbit coats were all the rage when I was a kid, and consequently, I can’t imagine that the day’s rain showers were especially healthy for her coat (or her coat’s fragrance).  Odd.
So all in one place, I observed basketball shorts & flip-flops, Mullets & Mops, sombreros, tattooed faces, and fur coats.  Wow.  I’ve always heard it takes all kinds (and I often wonder why), and yesterday I saw evidence of that in a big way.  Admit it; you’re jealous.
Advertisement

One thought on “It Takes All Kinds”