Judged by Jenn in Appropriate Dress, Fashion Blog, fringe boots November 9, 2012March 22, 2016 426 Words
Yesterday was Thursday, November 8, 2012.  It was a mild day weather-wise, but the fact remains, we are now into the month of November.  As such, certain items of clothing just seem seasonally (seasonably?) inappropriate.  This is true regardless of the outdoor temperature.  For instance, strappy shoes? Wrong time of year.  Flirty summer dresses?  Save it for next spring/summer.  Seafoam green skinny jeans with white sleeveless tops?  You know the answer.  Apparently, though, this chick didn’t get the memo. 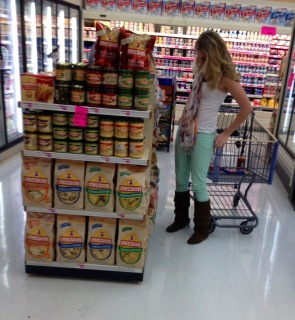 I saw her shopping in a local grocery store after I got off work yesterday afternoon.  (Step away from the tortillas.  Really?!)  I hate to break it to her, but adding the scarf and fringy boots does not a November-appropriate outfit make.  Yes, it is possible she wore a sweater or jacket to her job and shed her over-layer when she left work.  I’ll give her that.  I just can’t figure out what it was about a day with temperatures in the high-fifties to low-sixties that made her think sleeveless was the way to go — even after work hours.
Here are a couple of bonus shots… 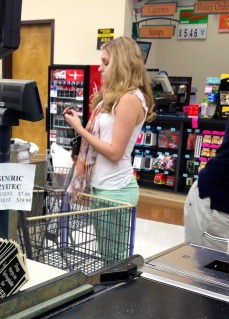 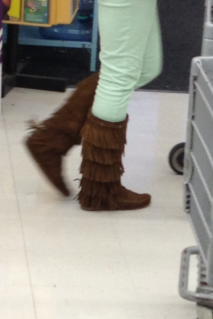 Dressing for weather conditions that often fluctuate wildly from one day to the next is admittedly one of the great challenges of living in this area.  I, for one, am beyond ready for cold weather to arrive.  There are winter clothes in my closet just begging to be worn, but with temperatures that could pass for either Spring or Fall, those clothes are going to have to wait.  (The cute spring/summer clothes are going to have to wait, too, though.  It just isn’t their time.)  The funny thing is, on a day like yesterday, one sees all extremes ranging from things like what the girl above has on, to folks wearing puffy down coats with fur-trimmed hoods.
I don’t fault people for strugging to dress under current weather conditions.  My mother would not have let me out of the house wearing something like this in November back in the day, though, and rules like that stuck with me.  (I’m sure she’d tell you that plenty of her other rules did not stick, but we aren’t going to ask her about that right now.)  Once upon a time there were rules about what one wore after certain points in the year.  (Think Easter, Labor Day…)  Whoever decided it was cool to relax seasonal fashion rules to the point that someone somewhere thinks this okay in November, well, I’m not sure what should happen to them, but it ought to be bad.  ﻿