Judged by Jenn in Uncategorized November 13, 2012 627 Words
The guys have it. Well, they have it if “it” you mean Sunday’s Worst Dressed Award.
Look, I am a far cry from a men’s fashion expert. Let’s be honest, men’s fashions aren’t incredibly exciting to me. You have casual wear, business attire, and formalwear, and then some gray areas in between. Some things look better than others, but as far as I am concerned, the variety is kind of lacking. Given that, you would think it would be harder for men to screw up wardrobe-wise. Sadly (for them), that just is not the case.
Sunday morning after CrossFit, I had the rather unfortunate task of making a Walmart run. I’d put it off as long as I could, and at that point, it was plainly and simply a necessary evil. Always the first to tell off on myself, I will allow that I might well have made someone else’s snarky blog, as I was in a running skirt, knee-high socks, and a CrossFit t-shirt. I looked less than stylish, but at least I was dressed that way for a reason. I don’t just head to the store attired in that manner on a rest day, for example. Whether that makes it better or worse, I don’t know (or care); I am just sayin’.
As I hopped out of my vehicle and headed into the store, I was fortunate enough to encounter & capture a photo of this guy. 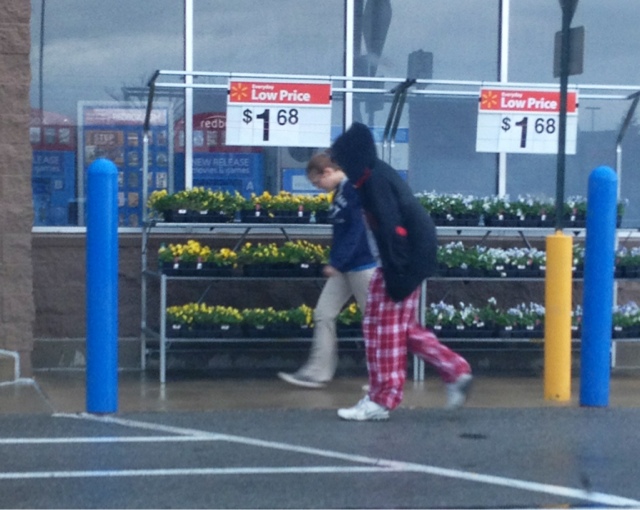 Granted, I disapprove of the pajamas- in-public phenomenon whether the wearer is male or female; this time, the offender just happened to be male. They are pajamas, for crying out loud. Nightclothes. Sleepwear. Bedclothes. All of those terms imply that they are not intended to be worn in public. I know some vendors have marketed them as “lounge pants” — Gap & Old Navy, I am looking at you — and I can even accept that. Here’s the thing about “lounge pants”, though: “lounging” implies that a person is relaxing, and sitting around AT HOME. It does not imply that you are shoving a cart through the congested aisles of your local Walmart. Really?! Is it that hard to put on a pair of pants before imposing yourself upon the eyes of the public?

Despite my obviously, um, strong feelings about pajamas in public, I would almost welcome that if given a choice between that and what I saw exiting the store. 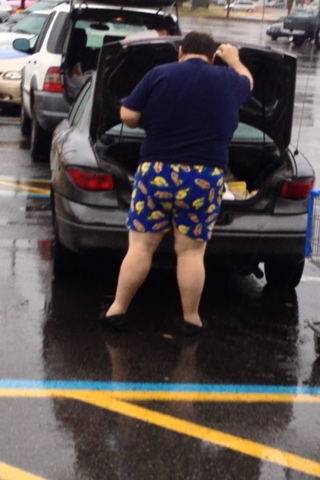 He was a couple of registers closer to the door than I was, and his cashier was a little faster than mine, so I had to all but sprint to be sure I didn’t lose him before I got a photo. (I’m sure it was comical to watch.) I am still not sure what the pattern is on his shorts. I AM sure, however, that those shorts should have never been worn outside his house. I’m pretty certain they shouldn’t be worn in the house, either, but that is between him and his significant other. (She was with him, by the way. I can’t believe she allowed him out of the house, or was willing to be seen with him wearing those shorts, but maybe that is just me.) Those shorts can’t possibly have been comfortable. Just look at how they are bunching up. (I know; it hurt my eyes, too.)