Judged by Jenn in Uncategorized September 11, 2012March 22, 2016 1,106 Words
I have been fortunate to practice law in multiple courtrooms in two different states.  While the way judges conduct their respective dockets is different from state to state, county to county, and even courtroom to courtroom, one thing seems to remain constant: The parties, witnesses, and observers who come to court don’t have the slightest clue about appropriate attire.
Once upon a time, when one wanted to convey to someone that he/she should dress nicely, the words, “wear your Sunday best” were frequently used.  In the good old days that implied a suit, or at least clean jeans and a button-down shirt for the guys, and a dress or a skirt and blouse for the ladies.  Now, however, with so many churches and religious institutions going to a more “casual” service to cater to those who want to roll out of bed and onto a pew, using the phrase “Sunday best” no longer ensures that the advisee will understand how he/she is to dress.  After all, these days one’s “Sunday-go-to-meeting” clothes are the same as those worn to Walmart, which often translates to pajama bottoms and a t-shirt/sweatshirt/tanktop.  What makes makes such an outfit one’s “Sunday Best” is the fact that said pajama bottoms and top actually match one another, whereas any time other than Sunday, matching is not guaranteed.
I once had a client show up to get divorced wearing khaki cargo shorts.  Needless to say, the judge was less than impressed.  My client explained that he had his U-Haul loaded and was moving somewhere in the northwest the instant the decree was signed, and all his other clothes were packed.  The judge glowered at my client over his glasses and strongly suggested he should have kept some long pants out to wear to court, but thankfully allowed him to go through the requisite motions to get divorced rather than making him unpack his U-Haul in the courthouse parking lot to find something more appropriate to wear.
Because people simply don’t have good sense these days, more and more courts have started posting a dress code at the door so people know what is and is not acceptable.  Dress codes aren’t new.  Several years ago I attended court at a facility that posted a sign on the door stating defendants who appeared in shorts and/or tank tops would be sent home to change clothes.  These days, however, the signs have gotten much more specific.  I give you the following: 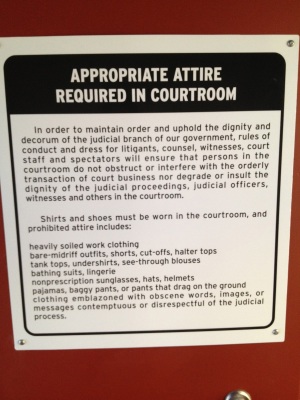 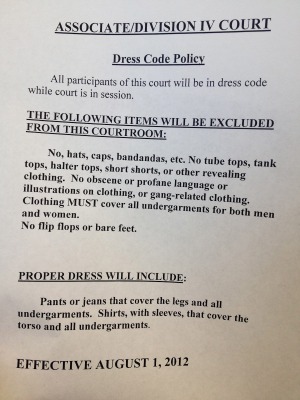 It is a sad state of attire when it becomes necessary to tell people they shouldn’t expose their respective midsections, or that it isn’t appropriate to wear tube tops, halter tops, bathing suits, pajamas, lingerie, helmets, or clothing depicting gang-related messages or obscenities to court.  Seriously?  It’s sort of like the warning labels on products.  You just know that someone tried to dry his/her hair in the shower; otherwise, why would that warning be necessary?  I can just see some nitwit wearing his Speedo to court and thinking if it’s okay to wear to a public beach or pool — it isn’t, by the way — that it is okay to wear it to court.  WHO DOES THAT??? (Yes, I’m sure it’s more likely that some female showed up wearing her bikini top, but I’m having fun with this.)

And then I see something like the following, and understand why such an admonition is necessary. 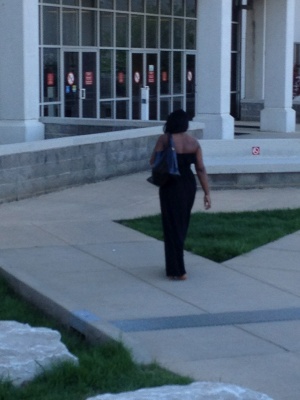 “Now, wait, Jenn. That dress appears to have straps,” you may be saying.  I assure you, this was a strapless maxi dress.  Those black straps you see — the left of which is serving double-duty as a keyring holder — are her bra straps.  I am pretty sure this violates the “dress code” in more ways than one.  That includes the matching pink flip-flops.  (Note: this photo was also taken outside the Greene County Courthouse in Greene County, Missouri.  I have not personally observed a dress code posted at that courthouse; the two dress codes I posted are from other courthouses in other counties.)
And today we had this gem:

True story: I was thrilled to death to see this young woman walking across the parking lot at the courthouse in Greene County, Missouri — are you sensing a trend here? — this afternoon.  In fact, I hustled across the parking lot myself just to be sure I didn’t miss the opportunity to snap a photo of this incredibly questionable fashion decision.
As I’m sure you can tell, the dress — yes, it’s a dress — is one-shouldered.  It is EXCEPTIONALLY short, and her pasty-white legs are showing all the way to her … ahem… biscuit.  (Yes, I am guilty of having watched an episode or several of Honey Boo Boo.)  As a friend of mine pointed out, you know having a small child with her, she has to bend down and stretch up, “neither of which would be good”.  I pointed out at the the small child might actually be a saving grace since his foot may be the only thing holding the hem of that Flintstonesesque number down.  Another friend argued that the pink flower in her hair makes it professional.  (I agreed, assuming we are talking about a professional hooker.)  I have no idea what sort of matter this young woman was appearing on.  All I know is she hopped on the elevator and was gone before I had an opportunity to test my covert iPhone photography skills by snapping a photo of the front of the dress.  This fact still saddens me.  Ladies, even if the sign doesn’t specifically say it, a one-shouldered dress has no place in a courtroom, and the only place a crotch-skimming one belongs is on a street corner.
Were do these people come from?  Didn’t their mothers teach them anything about dressing properly for a given situation?  Don’t they have mirrors at their houses?  And to the last young lady: Do you really thinking you looked so smoking hot in this dress that we would look past the sheer inappropriateness of it?  Because I can assure you, everyone who saw you was indeed speechless, but not in a good way.

One thought on “A Word (or Several) on Proper Courtroom Attire”